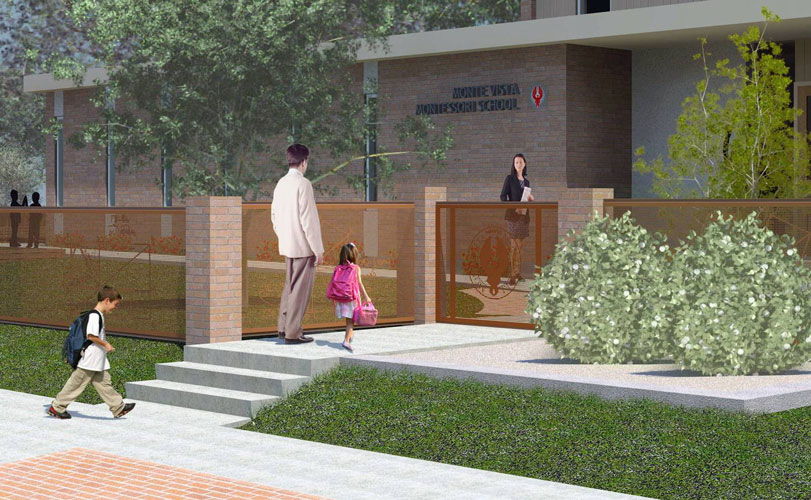 SYNCRO Architecture Studio was commissioned by the Monte Vista Montessori School to prepare a Conceptual Master Plan for the campus. A school master plan is needed to provide a long-term vision for facility planning and a rationale for several specific improvements needed in the near future. This early stage, broad brush-stroke exercise has identified areas of opportunity and of deficiency. Interior and exterior spaces and features have been analyzed. Multiple improvement projects have been identified and conceptually explored by SYNCRO in the master plan for their potential contribution to the school’s mission. Along with conceptual design of improvements, estimates of their future cost to the school is being documented in the report.

The school was formed in 2008 and moved into this late mid-century building, a former residence for convalescing nuns, with minimal construction. Not surprisingly, one of the findings of our evaluation is the potential for a much more efficient use of the building’s interior. SYNCRO conducted an accessibility survey which will yield suggestions for improvements to facilitate accessibility for the disabled.

Improvements expected to be enacted upon in an initial phase of construction include new perimeter fencing, new exterior doors and an improved drop-off/pick-up area in front of the main entry. SYNCRO provided regulatory agency coordination services including working with the Monte Vista Architectural Review Committee and gaining regulatory approval from the City of San Antonio Office of Historic Preservation for the fencing improvements.

SYNCRO Architecture Studio proposed an artistic metal panel fence utilizing digital design and digital fabrication to convey a sense of creativity and discovery embodied in the Montessori method. Additionally, we proposed to facilitate a series of visioning sessions to develop themes for the artwork and imagery. By utilizing a digital design and manufacturing workflow, unique panels can be economically produced using computer-numeric-controlled (CNC) tools. The illustrations shown here are conjectural and intended only to demonstrate the concept and illustrate some of the possibilities of this design and fabrication technology.