This article, by Charles Marohn, on The Strong Towns web site, presents a clear and concise perspective on the unsustainable American Dream. As San Antonio considers allocation of funds to be raised in the 2017 municipal bond process, public discussion has never been more important. The past 70 or so years of urban development in San Antonio represents the only pattern most of us are familiar with. We would be better able to make decisions for a more sustainable future if we understand the larger context of our sprawling urbanism. Sprawl is the only urban development pattern most Americans have ever experienced. Please read this, San Antonio. (You might even consider joining in what will undoubtedly be a spectacle of a public forum regarding the bond.)

We often forget that the American pattern of suburban development is an experiment, one that has never been tried anywhere before. We assume it is the natural order because it is what we see all around us. But our own history — let alone a tour of other parts of the world — reveals a different reality. Across cultures, over thousands of years, people have traditionally built places scaled to the individual. It is only in the last two generations that we have scaled places to the automobile. 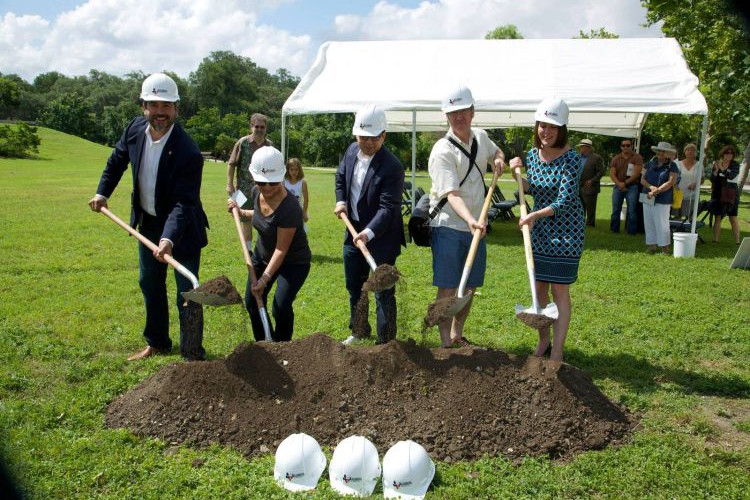 I attended the groundbreaking ceremony for the improvements at the park last week, and was surprised when our former District 1 Council representative, Diego Bernal asked me to join them in the shovel line. “Diego,” as he insists all his constituents refer to him, was the driving force behind the initial bond allocation for the park and subsequently found additional funding that was required to round out the scope of work to include perimeter improvements along North Flores Street. It was rewarding to have been asked to join in for the photo alongside our new District 1 representative Roberto Trevino, another neighbor and CoSA Parks and Recreation.

Through several public meetings, public input managed to help steer the design development of the project. I, along with several other neighbors and professionals, voluntarily advised the neighborhood association, as well as the councilman, on some of the technical and urban design-wise aspects of the improvements. Some of the benefits of citizen involvement included a revisiting of the San Pedro Springs Park Master Plan (abbreviated as it was) with public input, promotion of native plant materials, prevention of construction that would later be required to be removed when future phases of work gets funding, and removal of the existing perimeter sidewalks along North Flores Street where the most popular street parking is.

The new lighting will have LED technology lamping, but in matching “historicizing” lamp poles. Along the new walking trail and around the perimeter of the park, this should provide a visible improvement to the night time atmosphere of the park. The hope is that this near-perimeter fitness trail feature and lighting will attract more activity to the park and health to our neighborhood. The next time bond money becomes available for park improvements, I hope there will be funding for a planning process to update the park master plan and develop a prioritization from public input before the decisions about what will be built next are made. 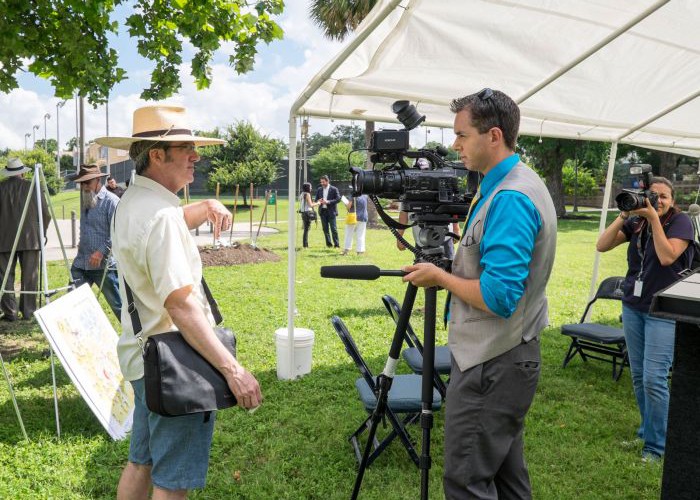 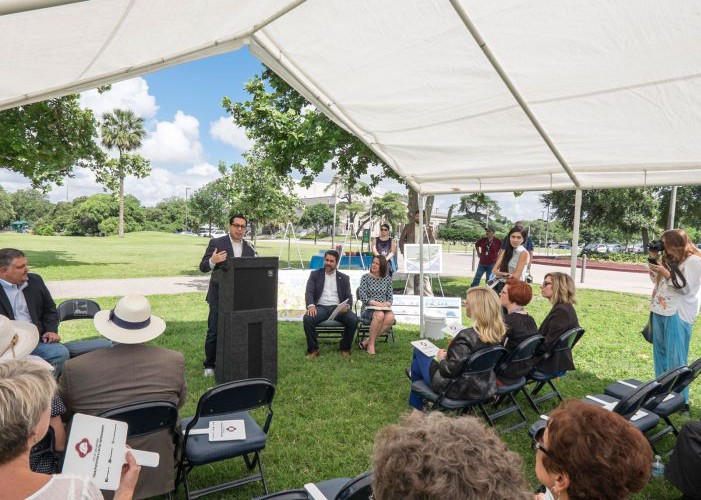 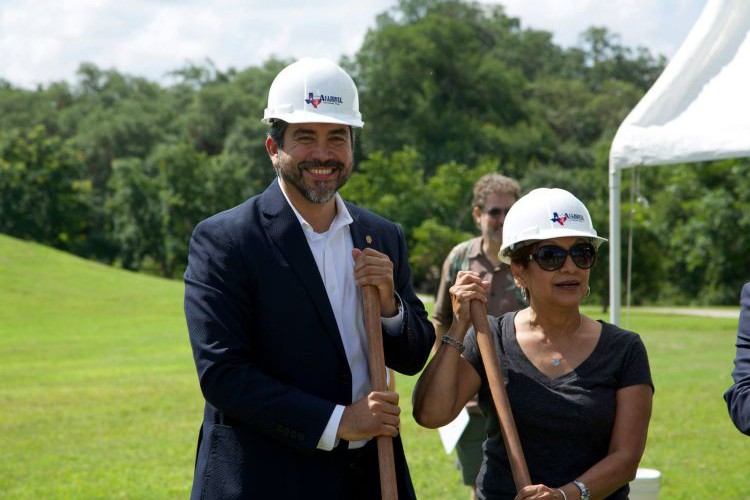 Save our History for our Future | Trinity University

The lecture and panel discussion, "Save our History for our Future: Why Historic Preservation Matters and What’s in it for You,"

For more information, contact Larsen Andrews at landrew1@trinity.edu or 207-749-5181

via Save our History for our Future | Trinity University. 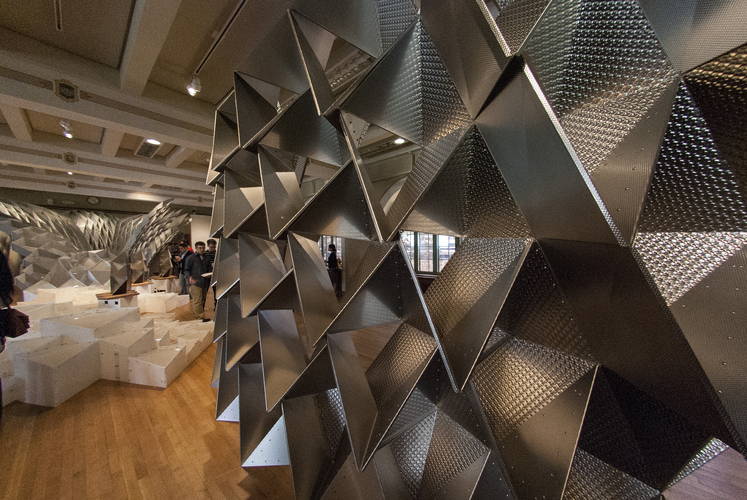 This winning submission to the TEX-FAB SKIN competition conducted design research on the structural properties of textured stainless steel sheeting, which typically is used for skinning and other non-structural purposes.

I’m at UT Austin, where I have not set foot since 1985, for a symposium today about digital design. I had a workshop yesterday, and will have another Saturday and Sunday. “This year TEX-FAB has elicited more of the world’s leading experts in Digital Fabrication to discuss and teach in a four day symposium at the University of Texas at Austin School of Architecture.” 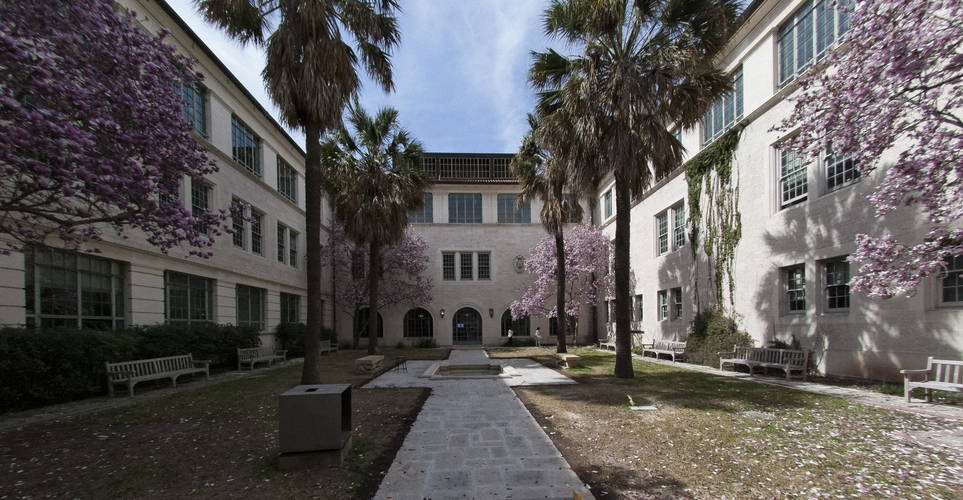 Most of these experts use software like Rhino, Grasshopper, Kangaroo, Processing. I use Revit so I’m taking the Dynamo for Revit Workshop:

….Through the creation of an architectural design concept, we will engage BIM through cyclic, open ended computational design processes anchored in contemporary research on design thinking.

2030 District is forming in San Antonio

In 2011 Architecture 2030 launched “2030 Districts” and now a 2030 District is forming in San Antonio. There is a general understanding of energy and sustainability issues at the scale of a building. The interrelationship among all the elements of the built environment is much more difficult to grasp (and measure.) Urban development patterns of buildings, people, plants and ecosystems, pavement, transportation, infrastructure of utilities, etc. make up the whole of urban systems. Urban systems have a great potential for energy savings and can only be dealt with effectively comprehensively, or as a whole. Urban designers, deep-pocketed real estate developers and city planners think and work at this scale, but mostly on a project-by-project or piecemeal basis. Municipal planning agencies don’t have enough power to bring comprehensive planning into its full potential for sustainability progress.

2030 Districts is a private sector-led sustainability initiative on the scale of the city or district. This win-win solution’s theory goes that businesses can be more successful – strengthen their market share – while saving energy, cutting greenhouse gas emissions and developing a more livable city with this higher level of collaboration toward urban sustainability.

Please see the 2030 web site in the link to the right for more background information and come to the AIA San Antonio’s new Center for Architecture on January 9 to join in the local effort for a more sustainable downtown.

Below is an excerpt from 2030districts.org:

Across the United States, 2030 Districts are being formed to meet the energy, water and vehicle emissions targets called for by Architecture 2030 in the 2030 Challenge for Planning.

Through unique public/private partnerships, property owners and managers are coming together with local governments, businesses, and community stakeholders to provide a business model for urban sustainability through collaboration, leveraged financing, and shared resources. Together, they are developing and implementing creative strategies, best practices, and verification methods for measuring progress towards a common goal.

Established in Seattle, 2030 Districts are at the forefront of regional – and national – grassroots efforts to create strong environmental partnerships, coalitions, and collaboration around ambitious, measurable and achievable goals. 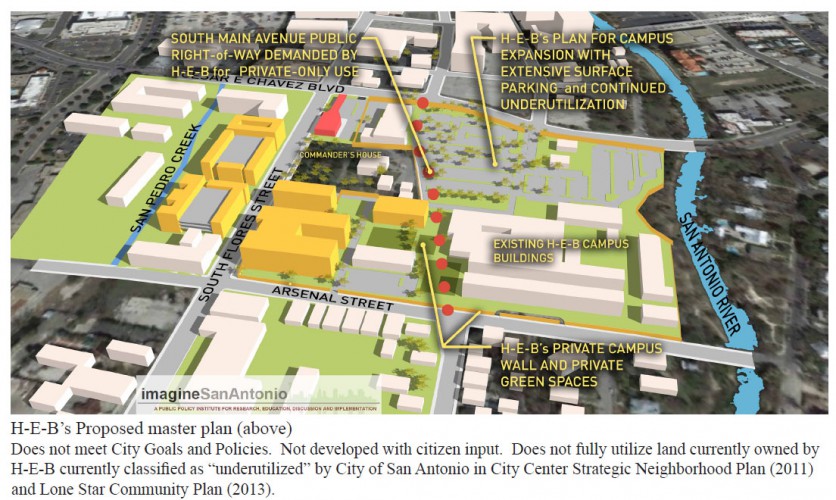 Red-dotted line is currently South Main Avenue. The entire northern half of the soon-to-be superblock is “planned” to remain underutilized and auto-oriented – this on the side facing downtown San Antonio.

Iris Dimmick, of the Rivard Report, wanted to speak to me after planning commission vote, and her article, “H-E-B Proposal Clears Planning Commission, Moves to City Council” is in the link to the right with some excerpts below in the grey box. First, here’s a little background and a curt summary of where things stand.

I made presentations to the zoning commission on Tuesday and to the planning commission on Wednesday. I emphasized the fact that the proposed plan by HEB does not comply with the relevant community-input land use plan. “High-Density Mixed-Use” is the community vision, per the Lone Star Community Plan. Bob Wise spoke and presented the win-win solutions from imagineSanAntonio per his article in the Rivard Report.

Zoning commissioners voted unanimously to allow, with a special use authorization, a gas station in the “Downtown” zone, against the land use plan. Like dominoes, and against the City’s 2011 Strategic Framework Plan, planning commissioners voted unanimously to declare as surplus, and to abandon, the public right-of-way South Main Avenue, dismantling the potential of this thoroughfare to become a complete street and to connect to other complete streets.

City Council cinched the deal on Thursday, voting to support HEB corporation’s plan to create a huge superblock in downtown San Antonio. Per their proposed plan it will have a new gas station and store with surface parking lots on its (otherwise potentially) most urban, north-east corner. This new privately-owned parcel will be almost twice as large as any other major American city’s largest superblock!

The proposed grocery store and gas station are “low density, single use,” Bogle said. ”The privatization of a street at this location would work against goals established for downtown.”

“These issues are not going to stop after South Main (Avenue) is sold,” Bogle said after the round of “yay” votes approved the closure. Tomorrow at City Council, “we’ll reiterate the valid concerns of the citizens … and the costs (of this plan) dismissed by the government.” 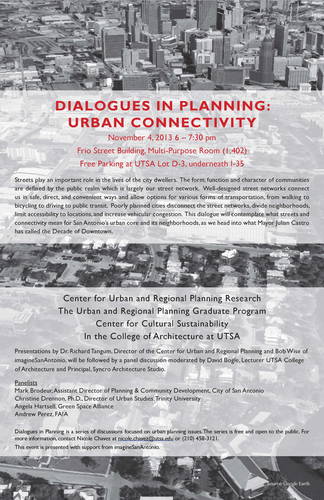 UTSA Center for Urban and Regional Planning invited me to moderate a panel discussion at their “Dialogues in Planning” forum next Monday, November 4th, entitled “Urban Connectivity.” Please join us and bring your questions for the panelists.

Streets play an important role in the lives of the city dwellers. The form, function and character of communities are defined by the public realm which is largely our street network. Well-designed street networks connect us in safe, direct, and convenient ways and allow options for various forms of transportation, from walking to bicycling to driving to public transit. Poorly planned cities disconnect the street networks, divide neighborhoods, limit accessibility to locations, and increase vehicular congestion. This dialogue will contemplate what streets and connectivity mean for San Antonio’s urban core and its neighborhoods, as we head into what Mayor Julian Castro has called the Decade of Downtown.