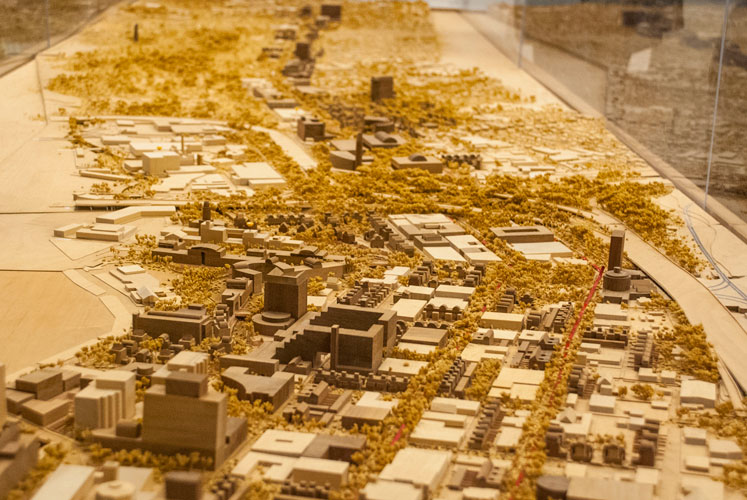 Below, and in the article linked in the right hand column, architect Sir Terry Farrell is calling for planning debates over physical 3D models. I find it reassuring that in this digital age there is still a continuing need for physical models over which people can share and discuss the built environment. Recently, the Westside Development Corporation inquired with AIA San Antonio and at UTSA’s College of Architecture about developing a budget for a physical model of San Antonio’s Westside. A couple of us from AIASA offered to show them an urban-scaled model of part of San Antonio. It was my first visit to see this well-crafted solid hardwood model of the Broadway Corridor, from downtown to Brackenridge Park. Currently, it is housed by the City of San Antonio Downtown Operations offices, but is not readily viewable by the public. At the scale of 1″ = 100′, architectural forms can be modeled and there can be a great understanding of urban space and scale and relationships among streets, parks and buildings.

While I now use primarily computer modeling in my practice, there is a time and place when only a physical model will suffice. Physical models are particularly beneficial for bringing people together to evaluate urban scale redevelopment proposals. Digital or computer modeling can be used to create physical models, yet the process is still skilled-labor intensive and involves relatively expensive equipment. Stockholm has invested in one! I hope Westside Development Corporation decides to move forward with their plans for physical modeling. We need more public rooms where we can look at our cities together and collaborate on progress.

The architect Sir Terry Farrell has called for architecture to be taught in schools, the listing of buildings to be decided by popular support, and the introduction in every town of “urban rooms” where planning can be debated over 3D models.

Launching his review of architecture and the built environment, commissioned last year by the culture minister Ed Vaizey, Farrell said the 200-page document should “be a catalyst for change and the start of a big conversation about our built environment, making it a major public issue like health and food”.

At the core of the report is a call for a fundamental shift in UK planning culture. “Planning, in the true sense of the word, is simply not done in this country,” Farrell said. “In many other places, such as New York , the height, bulk and use of a building is all determined in advance in detailed spatial plans, but here everything is on the table, with every possibility debated every single time. You could buy a plot of land, get lucky, and have a Shard built in your back garden. The tallest building in Europe was never on anyone’s plan, yet it stands there today.”

His guidance, detailed in 60 recommendations produced after extensive consultation over 12 months, focuses on a holistic approach, or what he terms Place (an acronym of planning, landscape, architecture, conservation and engineering).”Our weakness has come from the separation of heritage and transport, design and infrastructure, in separate silos,” he said. “Design reviews should be replaced by Place reviews, ensuring all aspects are given equal consideration in a joined-up approach.”