Sustainability is a Social Issue

Illustration for the NY Times Article, Overpopulation is not the Problem.

This excerpt from ERLE C. ELLIS’ article gets to an interesting point, that sustenance of humanity is primarily a societal issue – affected by how we act – versus being based on the natural systems of our spaceship earth. Also, it might just be helpful to be hopeful. I find myself telling my children “where there’s a will, there’s a way,” as my mother used to tell me.

“The science of human sustenance is inherently a social science. Neither physics nor chemistry nor even biology is adequate to understand how it has been possible for one species to reshape both its own future and the destiny of an entire planet. This is the science of the Anthropocene. The idea that humans must live within the natural environmental limits of our planet denies the realities of our entire history, and most likely the future. Humans are niche creators. We transform ecosystems to sustain ourselves. This is what we do and have always done. Our planet’s human-carrying capacity emerges from the capabilities of our social systems and our technologies more than from any environmental limits.

Two hundred thousand years ago we started down this path. The planet will never be the same. It is time for all of us to wake up to the limits we really face: the social and technological systems that sustain us need improvement.”

via Overpopulation Is Not the Problem – NYTimes.com.

Architecture in Tune With the Climate – NYTimes.com 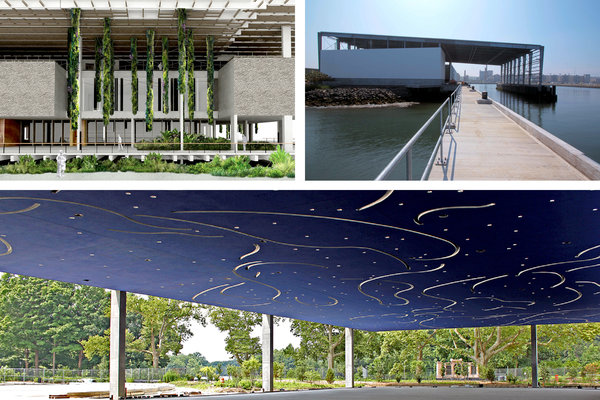 Reading my neighbor’s copy of the Sunday Times I found this article which I’ll share with my Systems Studio students (4th year design studio in the UTSA College of Architecture.) It begins:

“Building “green” is nothing new. For decades, many architects have tried to adapt their designs to forestall a new normal, choosing materials that will be less damaging to the environment and arranging rooms to be heated or cooled by the sun and wind, not the grid….Two design programs rolling out this year and next,…evidence of big thinking along the same lines: learning to solve with systems, not style.”

Seek simple systems and solutions to issues of function and sustainability, eyes open, and beauty will be had.

via A Crop of Projects With Green Bonafides – NYTimes.com. By Phillip Nobel 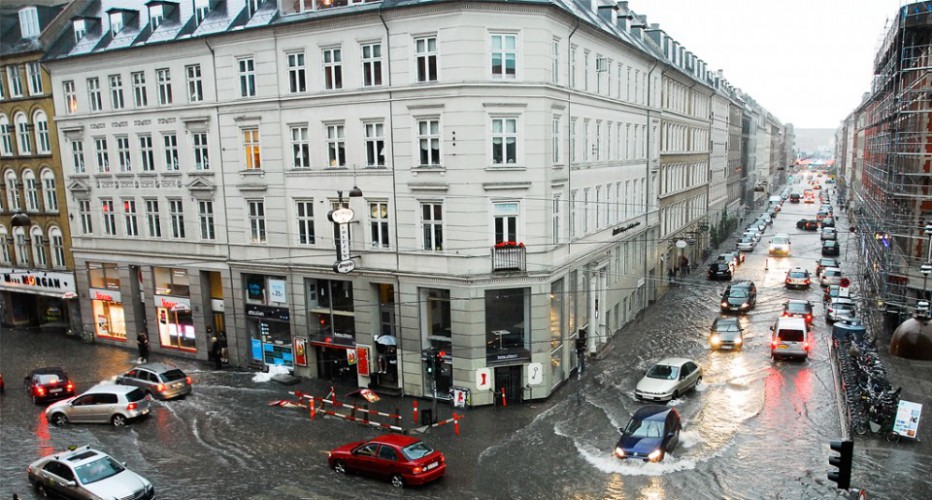 Copenhagen has an award-winning “Climate Adaptation Plan.” Goals I see highlighted are not unlike our own local efforts toward flood prevention and watershed management which include: “low-impact development” or LID by San Antonio River Authority (SARA), City of San Antonio’s Regional Storm Water Management Program.

There have been some awards for the local achievements, also, of course. The recent LID Design Competition, turned out some great work. 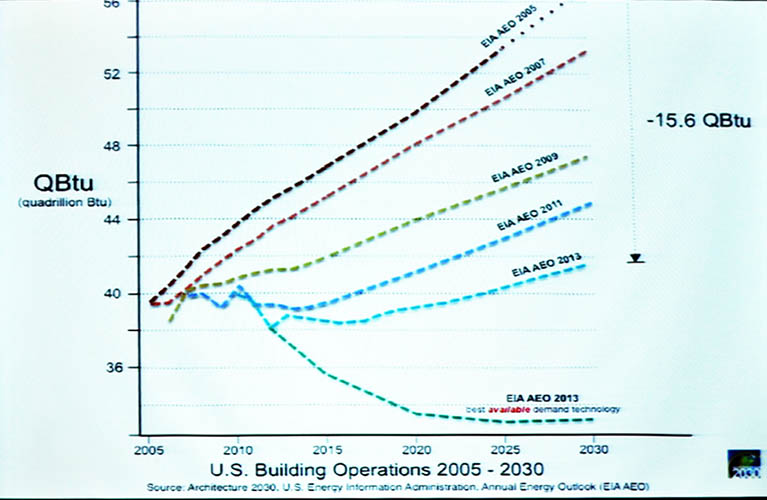 A photo of a slide from Edward Mazria’s San Antonio presentation depicting projected estimates of how much energy will be used for building operations in the U.S. The lowest line shows the potential for lower energy use through the use of the most efficient “demand technologies,” a.k.a. lighting, HVAC equipment, appliances, etc. (Source http://therivardreport.com/architects-no-one-else-can-solve-climate-change/ )

Though there still exists a significant risk of global warming and all the associated negative changes that may lie ahead, the possibilities for lowering energy demands abound and architects continue to lead the charge that could help avert the disaster scenarios. Buildings can and are getting more efficient through both basic passive-design decisions and more efficient material and equipment technologies.

Local coverage of the event, moderated by Robert Rivard, is covered nicely by Iris Dimmick on his Rivard Report here.

This is the best software I have found to analyze both new construction and retrofit improvements for optimizing energy efficiency improvements decisions for residences. It is free software developed with our tax dollars by National Renewable Energy Laboratories.

Which retrofit will give you the most bang for your buck? This is the software package to answer that question and take the design process from energy-intensive construction to an elegant whole-house net zero design solution and any point in between. for example you might wonder how much energy can you save by designing a house with ducts in the conditioned space versus in an unconditioned attic. This allows you to compare alternatives such as this, as well as among different glazing assemblies, types and amounts of insulation, appliance types, etc. 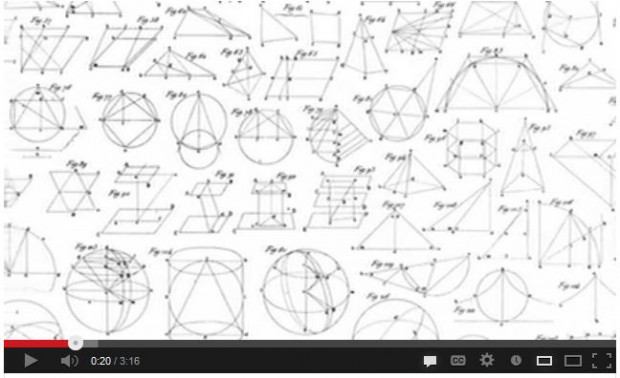 This is the first installment in an upcoming series of videos by the American Institute of Architects (AIA) Knowledge Community for Custom Residential Architects network (CRAN). Maybe all our acronyms won’t be common parlance, but we do need to demystify the services we provide. This somewhat clumsy, very non-gender-neutral introduction to the planned series offers a bit of information about the making of an architect. 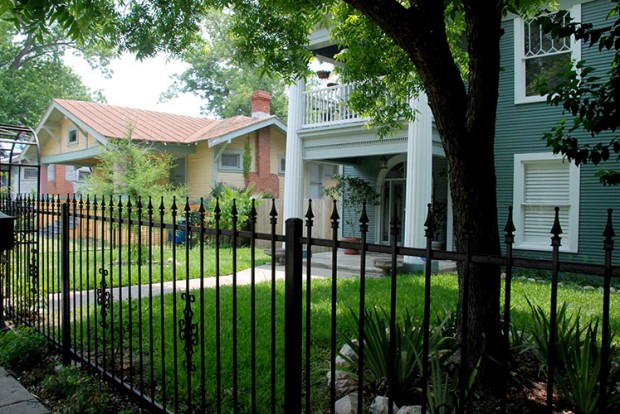 We are studying the infill potential of Alta Vista Neighborhood for both residential and commercial uses. – Photo by Claudia Guerra

I saw some parallels with the scenario this article describes for Chicago. We’re investing in place, here at home. We’re just operating on a much smaller scale, and we’re at an early stage in the process.

“When housing and job growth occur in communities with transportation options, households have more options to live, work, get around in affordable communities.

When communities grow compactly, close to jobs and along transit routes, households have greater choice between affordable communities in which to live, increased employment opportunities close to home, and multiple transportation options connecting the two….”

Envisioning the future of the growing American city, Neal Pierce suggests, through references to Bellevue, Washington, Amsterdam and Bogota, a better way to grow.

Even here in Alta Vista, one of the first streetcar suburbs of San Antonio, we are attempting to limit the dominance of the auto-centric environment, promote pedestrian-friendly public realm spaces. Similar goals are applicable to outlying areas of San Antonio as well.

Bellevue was a sprawling suburban area once, as unlikely a candidate to become “a Class A center with high-rise buildings, plazas, parks, cafes” as is the ring of suburbs around San Antonio today. But a smarter future was envisioned and “[t]oday Bellevue is precisely that. Across the country, growing numbers of close-in suburbs are undergoing that same transformation from dullsville to walkable and inviting places.”

San Antonio can and must grow by developing transit-supporting density, parks and livability by investing in not only downtown San Antonio but also in additional nodes strategically located to work together. In so doing we can sustainably contribute some of the additional 75 million of new housing units that the U.S. will need by 2050.

Here at SYNCRO architecture studio we use Building Information Modeling, or BIM, to design and document buildings on which we are working. Many of our project involve adaptive reuse of existing buildings, so often we begin by measuring and modeling the site and building as we find them. One clear advantage to BIM over computer-aided-design and drafting (CADD) is that the virtual rendition of the built environment is in 3-D with BIM. One 3-dimensional model can be created, then viewed in multiple manners to provide a varied output of many 2-D drawings. The BIM model is not simply a rendition of geometry, but a complex database of information about the materials and relationships among the virtual components. Parametric capabilities allow manipulation of geometries and materials to study alternatives.

Soon I will be posting graphic examples from our current projects: an elementary school, a single-family residence and a restaurant. 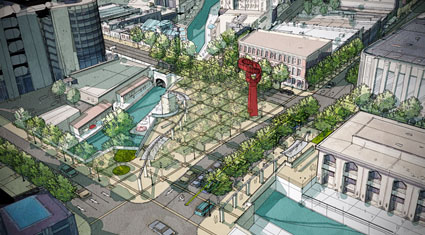 The latest Plaza de Armas readers forum was held at Trinity University’s Holt Conference Center. The packed-house audience played well the role of the choir with a few polite exceptions for the panelists to ponder the San Antonio-specific urban and architectural characteristics around which urban development dances.

Irby Hightower astutely offered several counter-intuitive insights to our urban heritage. For the past few decades there has been a focus on tree-preservation which unwittingly promoted an anti-urban predilection. (And by “urban” we mean walkable, transit-capable and livable density.) How can saving trees be bad? Well, when it becomes the basis for “urban” planning and development there is a lost opportunity to create livable urbanity. Further, Hightower pointed to creating great intersections as nodes of urban space rather than spreading urbanity along corridors in inherently lower-density efforts that do not create the synergies of livable higher density development. This is a call for what is commonly known as “transit-oriented development.”

Another refreshing point was made by Hightower in response to cautionary mention of gentrification, that double-edged sword of increasing land values and community displacement that comes with urban redevelopment of lower intensity / less utilized existing neighborhoods. San Antonio’s gentrification, he argued, is less harsh on existing communities than northeastern states’ scenarios where strong public debate has been played out. His rationale is that many existing residents here, and in other sunbelt cities, are homeowners, versus renters; and they therefore reap the financial benefit of their property selling. This often leaves them in a position of upward mobility to move to that suburban or exurban homestead of which they have dreamed. Whether or not this dulled edge does less cultural damage to existing inner-city communities under development pressure is certainly debatable but the economic story seems sound if significant percentages of residents have 100% equity in their homes.

That the discussion was at the level of urban design and barely touched on innovative architectural design was a little disappointing; but at the same time reassuring that the urban environment, among the preachers and the choir at least, is understood here in San Antonio at a high level. Understanding of the deep causes and effects will bode well for San Antonio’s next 30 years when we will see an additional 1 million residents occupy our fair city. It will help produce a “great” city made of “good” buildings. Hopefully, the next architectural readers forum will drill down to the scale and mechanisms of production of “great” architecture. In the mean time, let’s continue to build good, modest buildings.

As Mies Van der Rohe said, “I don’t want to be interesting, I want to be good.”